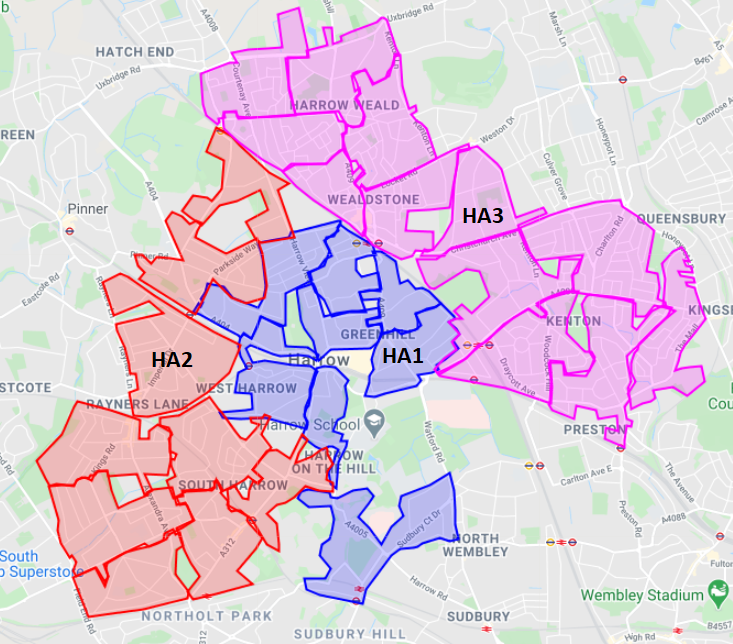 Harrow’s name is originated from the Old English name of “hearg”, which means “heathen temple”. The temple most likely it was situated on the top of the hill of Harrow, where St. Mary’s Church stands nowadays.

Harrow is made up of 9 wards: Harrow on the Hill, Harrow Weald, Headstone, North Harrow, Kenton, Rayners Lane, South Harrow, Wealdstone and West Harrow. The Borough of Harrow had a population of 250149 people in 2011.

See below the list of postcodes within the HA1 area covering the areas of Harrow, Harrow on the Hill, North Harrow, Northwick Park, Sudbury (north), Sudbury Hill. HA1 postcode contains approximately 15,519 households with a population of about 38,479 (2011 census). In HA1 (especially in HA1 1, HA1 2), there have been 100s of new flats built, which we have added to the 2011 Census data.

This is a list of postcodes in the HA2 area covering the areas of North Harrow, South Harrow, West Harrow, Rayners Lane (south).

In the previous years, our leaflet distributors gained a vast experience and a thorough area knowledge in distributing our customers’ flyers in Harrow.

GATE Leaflet Distribution is one of the most (maybe the most) knowledgeable leaflet distribution Harrow (HA1, HA2, HA3) company to deliver your leaflets. You can trust that GATE will deliver all your leaflets in Harrow postcodes to the highest standard possible. We have the invaluable local knowledge, what we have built over of continuous distribution in Harrow.

If you have any enquires about leaflet distribution Harrow (HA1, HA2, HA3), then please contact us today! You can book your next campaign with GATE. Drop us an email at [email protected] or call us on 02089026388.